How to Move Your MySQL to Redshift

Data analytics is a requirement for virtually every business today. However building an analytical data warehouse requires vast computing power to maintain performance and quick retrieval of data and results. In addition, the organization’s IT teams need to acquire new skills and infrastructure know-how to establish and maintain their BI systems.

To fill this infrastructure gap, Amazon Redshift brings a fully managed cloud solution for modern data warehouses. It delivers a massive parallel processing data warehouse architecture and uses a columnar data store that can aggregate and analyze large amounts of data. It enables faster performance - no matter how much data. That’s why Amazon with its Redshift columnar storage has become the solution of choice for companies like: Nokia that moved its high data usage activity to Redshift and now runs queries two times faster. And, VivaKi that loaded 10 terabytes of data in only six hours with Redshift architecture.

So, for real-time data analytics on high volumes of data, Redshift has distinct benefits which obviously MySQL, PostgreSQL, or other common databases cannot handle at scale. However, though we see great success stories like Vivaki, moving data from your database to Redshift isn’t straight-forward. Or what if a data mart is right for you? If you're unsure, comparing a data mart vs. data warehouse is the first step.

In this article, we’ll provide a step-by-step sample procedure for how to migrate your MySQL to Redshift.

Amazon Redshift to the Rescue

Amazon Redshift has provided a very good solution for today’s issues and beyond. As you’ve probably experienced, MySQL only takes you so far. It’s not designed to cope with your data scaling, data consistency, query performance, or analytics on large amounts of data. Redshift is built to handle large scale data analytics. Plus, it’s cost effective, especially compared to other analytics-specific databases like Hive and Impala.

Before jumping into action, let’s understand these Redshift differences from MySQL:

One of the biggest differences between MySQL and Redshift is how the way each handles database workloads. MySQL uses OLTP system where the purpose is to control and run fundamental business tasks. Its purpose and design is for fast transactional random access, not analytics.

By using OLAP, Redshift gears its system for analytics and helps with planning and problem solving. With the OLAP columnar design, Redshift improves on performance. The data is organized in a way which allows for better compression and easier sequential reads. Therefore, large amounts of data scanning is done quickly.

There are two types of compute nodes available for RedShift. The first is DW2 which is very a dense compute running on SSD. DW2 are very fast solid state memory drives, that support the database’s I/O performance needs. They cost about $1.50/Tb per hour. The second node type is DW1 or so-called dense storage nodes, which in comparison to DW2 run on traditional storage disks. They cost around $0.50/Tb per hour.

Now that you’re familiar with Amazon Redshift, we’ll show you how to load data to it.

Some preliminaries: There are several ways to perform the load. The COPY command is the most efficient way to load a table, as it can load data in parallel from multiple files and take advantage of the load distribution between nodes in the Redshift cluster. It supports loading data in CSV (or TSV), JSON, character-delimited, and fixed width formats.

After initial data load, you can add, modify, or delete a significant amount of data, follow up by running a VACUUM command to reorganize data and reclaim space after deletes.

Using individual INSERT statements to populate a table might be prohibitively slow. Alternatively, if data already exists in other Amazon Redshift database tables, use SELECT INTO … INSERT or CREATE TABLE AS to improve performance.

We’ll discuss the best ways to use each of these commands by example.

So, let’s start - here are the 5 steps for loading data into Redshift:

Perform the following steps to create a cluster:

Choose the default value for the rest of the options and you are good to go.

Let’s assume that we have several tables to export to Redshift.

In following example, we run a statement to select all sales transaction for the past 5 years from tbl_sales and split them over to 1 million rows per file:

Move the generated CSV files into a directory called s3-redshift:

Create a new bucket for Redshift: 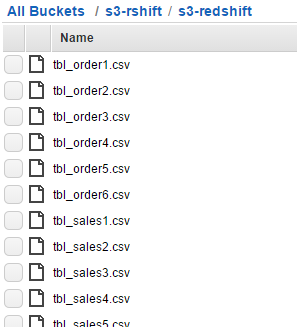 In the next steps, we prepare our Redshift:

To install PostgreSQL command we can execute the following commands:

4. Run a COPY command to load the table

Next, run the COPY command to access the CSV files in our S3 bucket and parallel load them into the table:

Now the data is available in the Redshift cluster and ready forquery processing.

From the psql client console, verify the table structure:

To verify that each table loaded correctly, execute the following commands:

All executed queries on the cluster can be seen on the Redshift Queries tab as well:

Click on the Query ID to get in-depth details on the query plan and status: 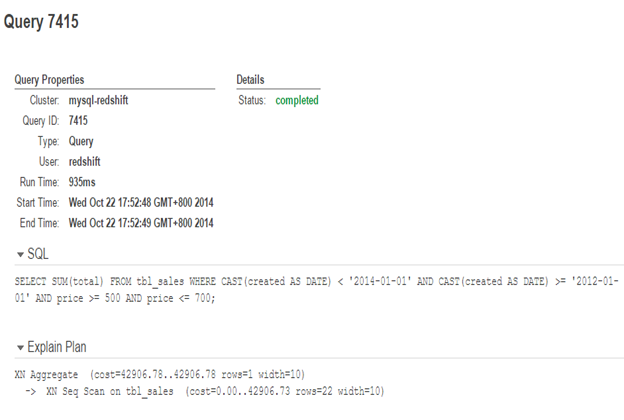 That’s it. Your data is now in Redshift!

Migrating data to Amazon Redshift is relatively easy when you have access to the right procedure. But, sometimes moving the data is sometimes not all you need to do. Be aware of issues like: Handling the metadata and things like stored procedures, triggers, custom functions that can be problematic and add complexity to the move.

With Amazon Redshift, your data is organized in a better way. Query processing and sequential storage gives your enterprise an edge with improved performance as the data warehouse grows. Therefore, migrating from MySQL to Redshift can be a crucial step to enabling big data analytics in your organization.

Check our our detailed comparisons between MySQL and MongoDB, and MySQL vs MariaDB.

Get a free consultation with a data architect to see how to build a data warehouse in minutes.
Request Demo
Read more in:
Data Warehousing Mysql Redshift
Share this post:

Data flows like never before, and with so much at our disposal, making the best use of it is a challenge. Many businesses use Google Sheets for everything from content ...
Data Warehousing

6 Use Cases For Connecting Google Sheets To Panoply

A recent IDC DataSphere forecast report predicts that the compound annual growth rate of global data creation and replication will reach 23% between 2020 and 2025.
Data Warehousing

10 Benefits And Use Cases For A Data Warehouse

Sometimes, the only thing standing between an analyst and a catastrophic management decision could be knowing the difference between the tables:
Data Warehousing